A good read for even the most casual theater historian. Choice 2005 A complex, rich work… an original important contribution to the history of the body and to political culture.

— Lisa Forman Cody American Historical Review 2006 He develops his micro-history of the growth and changes in British life with finesse and precision and a rich grasp of detail.

— Jacky Bratton Journal of British Studies 2005 This well argued text on pantomime offers a fascinating investigation of a subgenre of British theater. Scriblerian 2006 For readers who share O’Brien’s intellectual priorities, this book may well come to be regarded as an important contribution.

In the fall of 1723, two London theaters staged, almost simultaneously, pantomime performances of the Faust story. Unlike traditional five-act plays, pantomime-a bawdy hybrid of dance, music, spectacle, and commedia dell’arte featuring the familiar figure of the harlequin at its center-was a theatrical experience of unprecedented accessibility. The immediate popularity of this new genre created the first instance of youth culture in modern Europe, drawing theater apprentices to the cities to learn the new style, and pantomime became the subject of lively debate within British society.

Alexander Pope and Henry Fielding, for example, bitterly opposed the intrusion into legitimate literary culture of what they regarded as fairground amusements, which appealed to sensation and passion over reason and judgment. In Harlequin Britain, literary scholar John O’Brien examines this new form of entertainment and the effect it had on British culture. Why did pantomime become so popular so quickly? Why was it perceived as culturally threatening and socially destabilizing? Among other factors cited by O’Brien, Robert Walpole’s one-party rule, which increasingly dampened debate, created a vacuum in the public sphere. Pantomime filled that void with socially subversive commentary. At the same time, pantomime appealed to the abstracted taste of the mass audience.

Its extraordinary popularity underscores the continuing centrality of live performance in a culture that is most typically seen as having shifted its attention to the written text, in particular to the novel. Written in a lively style rich with anecdotes, Harlequin Britain establishes the emergence of eighteenth-century English pantomime, with its promiscuous blending of genres and subjects, as a key moment in the development of modern entertainment culture. 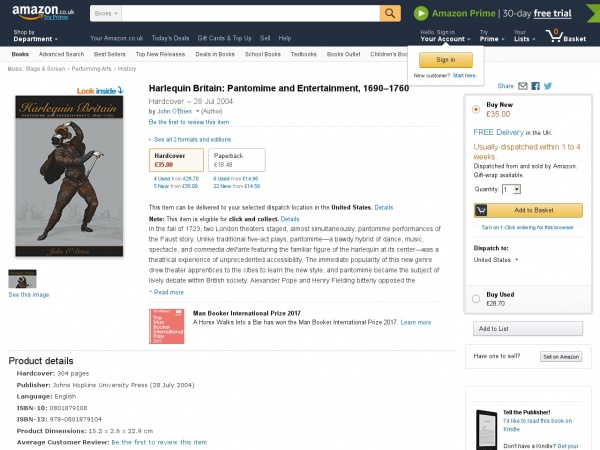