An indispensable manual for those who want to get into the art of Mime and Pantomime.

Julio Castronuovo leads the student to this “new art” through a wide range of practical exercises, examples and photographs of enormous utility for the development of the gymnastics applied to Mimo. We add the elaboration of a philosophy of this theatrical discipline, starting, from the respect and veneration, of the postulates of what is considered the initiator of contemporary Mime: Etienne Decroux. He closes the volume the Samuel Beckett mimodrama, act without words nº 1, one of the numerous montages that has carried out the author. Julio Castronuovo has developed his professional activity in multiple areas of the theatrical universe: actor, mime, dancer, teacher and stage director. He has more than 45 theater plays, among which stand out the numerous works by Samuel Beckett and the mimodramas Acto sin palabras nº 1 and Acto sin palabras nº 2.

He has also acted and directed for the Theater of mime various numbers of pantomimes of classic style, the mimodrama of Hugo Quintana The coat rack and the Pantomime of Love and Time, by Rubén Trifiró.

In 1967 he arrived in Spain with his show Pantomimas in black and white to embark on a series of shows, courses, conferences and recitals of mime in Spain, which combines performances in France, Switzerland, Italy, former Yugoslavia and Portugal.

From 1969 he settled permanently in Madrid where he continues his work as a mime, teacher and stage director. He is currently stage director and retired professor of the subject of Mimo and Pantomima at the Royal Higher School of Dramatic Art in Madrid. 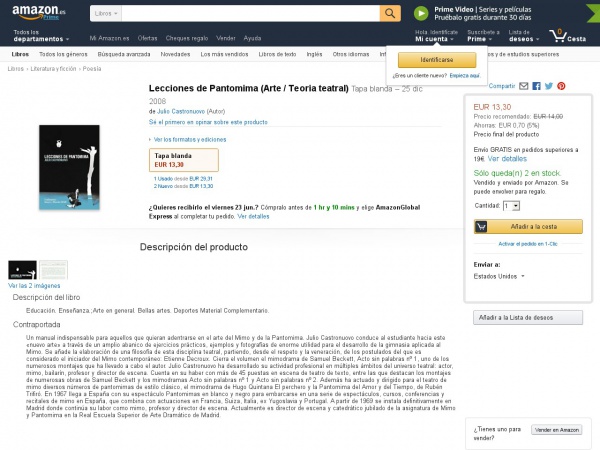