The Analysis of Performance Art

The Analysis of Performance Art: A Guide to Its Theory and Practice (Contemporary Theatre Studies) .


This finely illustrated book offers a simple yet comprehensive ‘grammar’ of a new discipline. Performance Art first became popular in the fifties when artists began creating ‘happenings’. Since then the artist as a performer has challenged many of the accepted rules of the theatre and radically altered our notion of what constitutes visual art. This is the first publication to outline the essential characteristics of the field and to put forward a method for teaching the subject as a discipline distinct from dance, drama, painting or sculpture.

Taking the theory of primary and secondary colours as his model, Anthony Howell posits three primaries of action and shows how these may be mixed to obtain a secondary range of actions. Based on a taught course, the system is designed for practical use in the studio and is also entertaining to explore. Examples are cited from leading performance groups and practitioners such as Bobbie Baker, Orlan, Stelarc, Annie Sprinkle, Robert Wilson, Goat Island, and Station House Opera.


This volume, however, is not just an illustrated grammar of action – it also shows how the syntax of that grammar has psychoanalytic repercussions. This enables the performer to relate the system to lived experience, ensuring a realisation that meaning is being dealt with through these actions and that the stystem set forth is more than a dry structuring of the characteristics of movement.

Freud’s notion of ‘transference’ and Lacan’s understanding of ‘repetition’ are compared to a performer’s usage of the same terms. Thus the book provides a psychoanalytic critique of performance at the same time as it outlines an efficient method for creating live work on both fine art and theatre courses.

Anthony Howell was the founder and director of The Theatre of Mistakes – a performance company of the seventies noted for its work in galleries as well as in theatres – and is the co-author of Elements of Performance Art, the first compendium of performance exercise. He has performed at the Tate Gallery (London), at the Paula Cooper Gallery (New York) and at the Paris and Sydney Biennales, as well as at the Jeanetta Cochrane Theatre (London), the Theatre for the New City (New York) and the Théâtre Dejazet (Paris). Recently he created "Commentary on Klein" for London’s Hayward Gallery. A Senior Lecturer in art and performance, he is the editor of Grey Suit: Video for Art and Literature, and for several years he has organised the performance festival "Cardiff Art in Time". He has also published a novel and seven books of poetry, and has lectured and performed at theatre festivals, at universities and at art galleries in Denmark, Serbia and Macedonia. He recently directed The Infernal Triangle at the ICA, London. 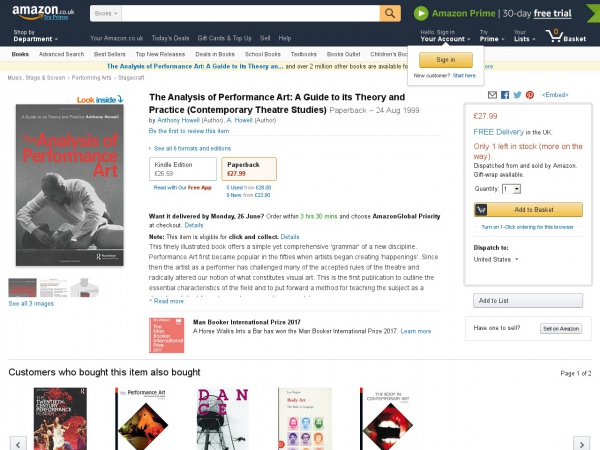