The Comic Mask in the Commedia Dell Arte

The Comic Mask in the Commedia Dell’Arte: Actor Training, Improvisation, and the Poetics of Survival.

Nobody says Shakespeare is dead. Antonio Fava tells us, but Commedia, they say, is dead. Why? Because clearly, he goes on, we have Shakespeare’s texts, but nobody knows what to do with the improvisation that is the basis of the "Commedia dell’Arte", despite massive documentation.

This book by Fava, one of the few living master teachers of "Commedia dell’Arte", is the first aesthetic and methodological study of the traditional Italian theater form – the first to describe, in a precise and practical way, what Commedia is and what it should be. The mask – as object, symbol, character, theatrical practice, even spectacle itself – is the central metaphor around which Fava builds his discussion of structure, themes, characters, and methods. Drawing on twenty years of research conducted through his work as performer, director, mask maker, and scholar, he offers extensive practical, philosophical, and technical guidelines to performing the stock characters of "Commedia", observing its structure, extracting its poetics, exploring its themes, and using the mask.

A densely layered text combining historical fact, personal experience, philosophical speculation, and passionate opinion, and including copious illustrations – period drawings, prints, and color photographs of leather Commedia masks made by Fava himself – The Comic Mask in the Commedia dell’Arte is a rich work of singular insight into one of the world’s most venerable forms of theater. 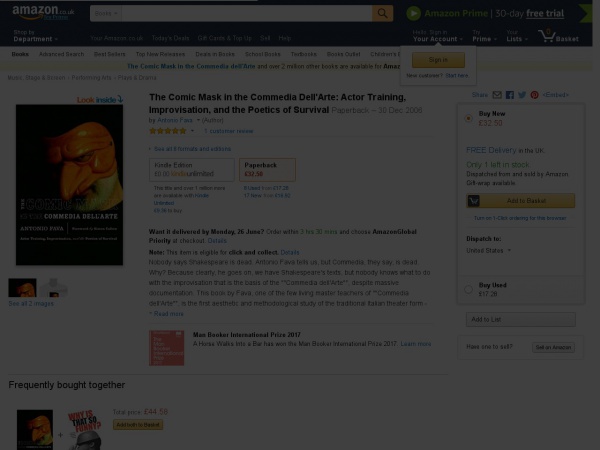