The Politics of the Pantomime

The Politics of the Pantomime examines English pantomime productions in the mid- to late-nineteenth century, focusing not on the pantomimes of the major London theatres but rather on the variety and independence of those in the provinces, in particular the three urban centres of Nottingham, Birmingham and Manchester.

Many regional productions were far from being pale imitations of Drury Lane spectacle and although sometimes curtailed by the practicalities of local economics, producers and writers nevertheless used their inventiveness to create pantomimes that were rooted in specific expressions of local cultural identity.

By the 1860s, regional theatres were establishing their own pantomime traditions, engaging specific and established local authors and employing a wealth of topical references that reflected the developing local urban and regional culture. For the importance of provincial pantomime lay in its geographical and creative distance from London.

Due to a combination of official leniency, distance from the Lord Chamberlain’s office and local collusion, regional pantomimes often played fast and loose with political satire, an aspect of provincial theatre that is often overlooked, but was openly recognised in the period. In redefining the importance of written and visual satire in those productions, this book explores official and local censorship and the relationships between local theatres, their managers, authors and the local audiences.

Jill Sullivan’s book provides a much-needed extension to current understanding of the role of nineteenth-century pantomime, bringing to light an important political dimension to pantomime productions and emphasising the genre’s relevance to local and regional culture in the nineteenth century. 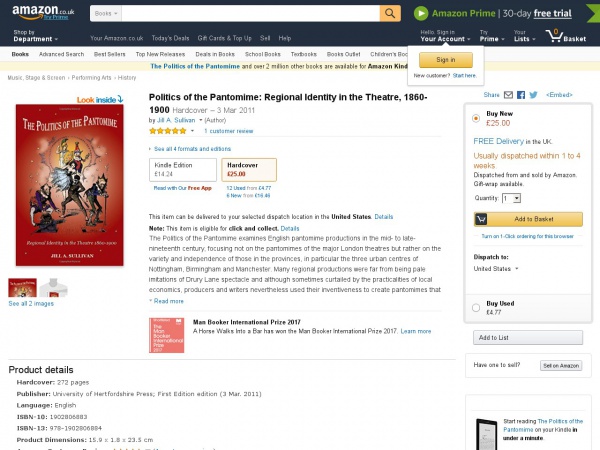