The book begins with El Mimo in Ecuador, a revealing chapter that describes a reality that could very well reflect what has happened to Mimo in almost all Latin American countries: solo and self-taught mimes, the stimulation provoked by some Decroux films or Marceau, foreign visiting teachers and especially the French Pradel, whom he considers the main source of direct inspiration for a generation of empirical mimics in the 60s, especially José Vacas, in particular for his pioneering character in relation To his later work of didactic transmission.
In Three ways of looking at pantomime, he analyzes the three typical ways in which the art of Mime has been valued: as a minor theater art, as an independent art and as an acting technique. This classification is novel because it establishes a distinction between the valuation of Mimo as a minor art of its use as an acting technique, undifferentiated aspects in other analyzes.
But what is most relevant is, on the one hand, the permanent contextualization of the concepts, and on the other, the theoretical framework on which it is based (without including, of course, the references it takes from what Rancière would call “the ignorant teacher”). Say, the one who writes).
In Beckett’s work, seen from two philosophical perspectives, Caceres once again displays his analytical sharpness to give us an almost microscopic account of Samuel Beckett’s Acut without words. He ventured to include it within the pantomime genre, but this is anecdotal against the stupendous counterpoint he achieves between Aristotle, Schiller and Freud to make us understand clearly what Beckett wanted to tell us about the mechanisms of power that manipulate human existence.
The aesthetic experience in Quito’s empirical pantomime is a twist of the book’s first essay in which, based on historical facts, it develops its theory about empirical mime and gestural forms that identify its practice, to which it adds an element Totally original to characterize this type of Mimo: Baroque, understood as a process of resistance to cultural colonialism. Like those Virgin Maria, who can be included without fear in what is called Baroque painting, which the Dominicans made them paint the Inca artists. And that they in a gesture of resistance painted with a tunic whose design is clearly identified with the shape of the mountain. They painted the virgin yes, but they also painted Mother Earth, their true deity.
The importance of memory revolves around the value of memory and identity in an ephemeral art such as theater, again within a context that covers the political reality of Ecuador from the 60s to the present, military dictatorship through.
Finally, in The Temporal and Spatial Axis in the Theater, and also in the Mime, he looks at these two key components of the stage practice, drawing on the views of several playwrights and theater directors, but making a point in Patrice Pavis and in the Chronotopos of Mikhail Bajtin. Although this analysis goes through intricate ways, it gives us a respite and a hope to know that behind all this framework moves chance as an inseparable element of theatrical fact. 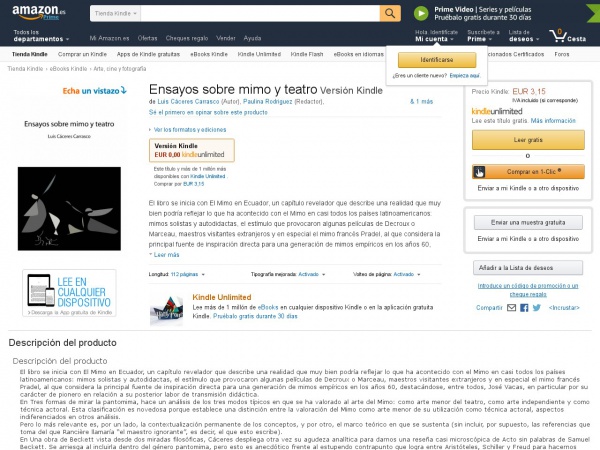