Jacques Lecoq and the British Theatre

Jacques Lecoq
and the British Theatre brings together the first collection of essays in English to focus on Lecoq’s school of mime and physical theatre. For four decades, at his school in Paris, Jacques Lecoq trained performers from all over the world and effected a quiet evolution in the theatre.

The work of such highly successful Lecoq graduates as Theatre de Complicite (The Winter’s Tale with the Royal Shakespeare Company and The Visit, The Street of Crocodiles and The Causcasian Chalk Circle with the Royal National Theatre) has brought Lecoq’s work to the attention of mainstream critics and audiences in Britain. Yet Complicte is just the tip of the Iceberg. The contributors to this volume, most of them engaged in applying Lecoq’s work, chart some of the diverse ways in which it has had an impact on our conceptions of mime, physical theatre, actor training, devising street theatre and interculturalism.

This lively – even provocative – collection of essays focuses academic debate and raises awareness of the impact of Lecoq’s work in Britain today.

Franc Chamberlain is Senior Lecturer in Performance Studies at University College Northampton. He is performer, director and writer.

Ralph Yarrow is Senior Lecturer at the University of East Anglia where he teaches drama, European literature and French language. He has directed and performed in India and Britain, and in English, French and German; his writings include adaptations for the stage. He writes on the theory and practice of improvisation, on contemporary literary and dramatic theory, on consciousness and aesthetics, and now on Indian theatre. His directing covers Kokoschka, Jarry Rozewicz, Churchill, Daniels, Pinter and Vinaver. _ 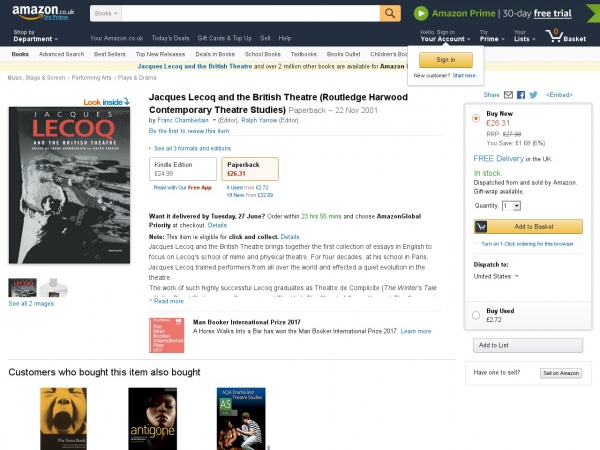