The son of a deranged Italian immigrant, Joseph Grimaldi (1778-1837) was the most celebrated of English clowns. The first to use white-face make-up and wear outrageous coloured clothes, he completely transformed the role of the Clown in the pantomime with a look as iconic as Chaplin‘s tramp or Tommy Cooper’s magician. One of the first celebrity comedians, his friends included Lord Byron and the actor Edmund Kean, and his memoirs were edited by the young Charles Dickens.

But underneath the stage paint, Grimaldi struggled with depression and his life was blighted with tragedy. His first wife died in childbirth and his son would go on to drink himself to death. In later life, the extreme physicality of his performances left him disabled and in constant pain. The outward joy and tomfoolery of his performances masked a dark and depressing personal life, and instituted the modern figure of the glum, brooding comedian.

Drawing on a wealth of source material, Stott has written the definitive biography of Grimaldi and a highly nuanced portrait of Georgian theatre in London, from the frequent riots at Drury Lane to the spectacular excess of its arch rival Sadler’s Wells; from stage elephants running amok to recreations of Admiral Nelson’s sea battles on flooded stages at the height of the Napoleonic Wars.

Joseph Grimaldi left an indelible mark on the English theatre and the performing arts, but his legacy is one of human struggle, battling demons and giving it his all in the face of adversity. 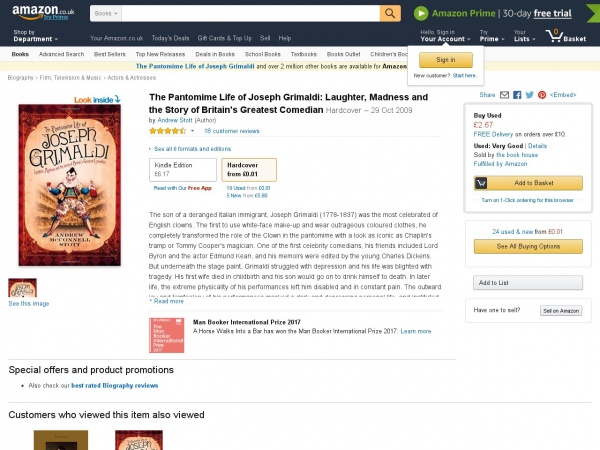