Pantomime Legend Marcel Marceau Honored By Centenary Celebration Exhibit and Publication of New Edition of Marcel Marceau: Master of Mime Book
THE NATIONAL ARTS CLUB — MARCH 9 through APRIL 28, 2023
The National Arts Club celebrates the centenary of the birth of the world’s most famous mime, Marcel Marceau, with an exhibition of photographs taken by Time/Life photographer Ben Martin. The exhibit, which is open to the public and free, will take place from March 9th to April 28 in conjunction with the publication of a new edition of Marcel Marceau: Master of Mime, a photojournalist’s view of the legendary artist as performer and friend. Begun as a Life magazine pictorial in the mid-1970s, their artistic collaboration produced an intense, intimate portrait of the mime whose stage creation, a white-faced clown in bell-bottom pants, sailor’s pullover and crumpled flower opera hat, continued a century old tradition. In more than 350 photographs, 80 in exquisite color, Martin captures Marceau behind the scenes, rehearsing, applying makeup, and performing. In a series of performance photos, he shows the artist conveying his miraculous emotional range as Bip, his onstage alter ego.
Cumberland Press will publish the revised edition of this intimate photographic portrait with a personal foreword by Anne Sicco, the mime’s widow, and an afterword by Robert Pledge, a close friend and associate of both Marceau and Martin.
To launch the centenary celebration, The National Arts Club will host a reception for Marceau’s friends and admirers, on March 20, 2023, at 15 Gramercy Park South, New York, NY 10003. Anne Sicco will be in attendance representing the Marceau family.
Marcel Marceau: Born Marcel Mangel in Strasbourg, France, on March 23, 1923, Marceau referred to mime as the “art of silence,” an art that he performed professionally worldwide for over 60 years. As a Jewish youth, he lived in hiding and worked with the French Resistance against the Nazi occupiers during World War II together with his daring older brother, Simon Alain Mangel. Marceau gave his first major performance to 3,000 allied troops after the liberation of Paris in August 1944. Following the war, he studied dramatic art and mime in Paris where, in 1959, he established his own pantomime school. In 1956, he won an Emmy Award, and in 1991 was elected to the venerable Institut de France as a member of the Académie des Beaux Arts. In 1998, he was made Grand Officier de la Légion d’Honneur and awarded the National Order of Merit in France. In 2002, the celebrated mime became the eleventh recipient of The Raoul Wallenberg Medal. 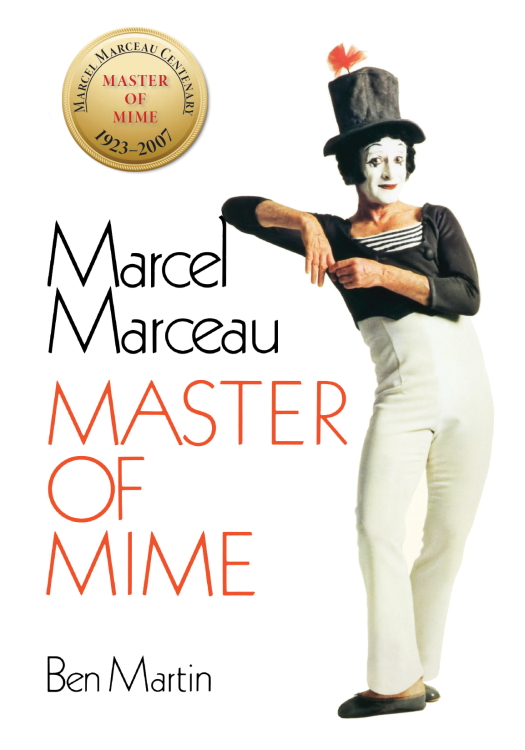 Ben Martin covered wars, fashion, politics, arts, business and sports for Time, Life, Fortune, People and Sports Illustrated for 33 years. He covered Martin Luther King’s Selma March, the first Nixon-Kennedy Presidential debate, Fidel Castro in Cuba and “Swinging London,” capturing “evocative images that defined the 1960s,” according to the New York Times. Martin’s photographic archive has been donated to the Briscoe Center at the University of Texas, Austin.
Marcel Marceau and Ben Martin – photo by Ben Martin
Kathryn Leigh Scott, Ben Martin’s wife of many years and publishing partner until his death, dreamed of reissuing the book. “Marcel offered to write an Introduction to a new edition, but passed away before we could make it happen. The dream was reawakened in early 2018 when I got in touch with Anne Sicco, Marcel’s widow. The two of us began discussing the possibility of an exhibit of the photographs and a new edition of the book to commemorate the centenary of Marceau’s birth, March 22, 2023. For us, it’s a tribute that honors the legacies of both men and their artistic collaboration”
Kathryn Leigh Scott is an author and actress who has written the novels September Girl, Jinxed, Down and Out in Beverly Heels and Dark Passages. Nonfiction includes the Lobby Card books on film art, Last Dance at the Savoy, The Bunny Years and a trilogy of books on caregiving: Now With You, Now Without, The Happy Hours and A Welcome Respite. She played Maggie Evans/Josette DuPres in the original Dark Shadows, and appears in feature films The Eleventh Green, Three Christs and A Rainy Day in New York. Kathryn resides in New York and Los Angeles. www.kathrynleighscott.com.
The National Arts Club —15 Gramercy Park South, New York, NY 10003, USA
Contact: Kathryn Leigh Scott 1-310-526-3636, kathrynleighscott@gmail.com
Press inquiries: Glass Onyon PR, PH: 1-828-350-8158, glassonyonpr@gmail.com